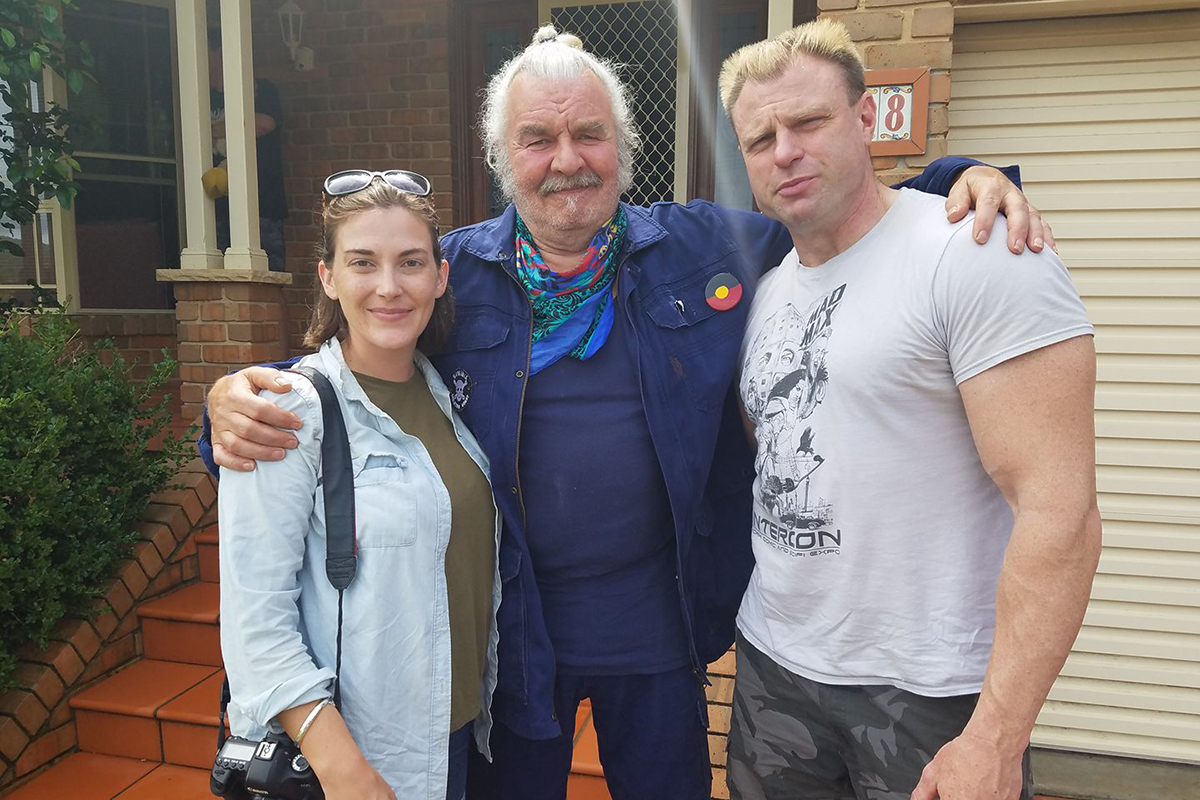 Faye Murman gave up her comfortable New York photojournalist job to follow a nearly naked man around the world. If that sounds crazy to you, then you might not know Jim “Tank” Dorsey.

Luckily for you, Faye is working on a documentary about Tank, his friends, and the intense dedication they give to portraying their favorite Mad Max characters.

“In a nutshell, what this documentary is about is the world of Mad Max cosplay, which I didn’t know existed until I started this documentary,” she described to me in an interview we did for the Through the Aftermath podcast. “It’s about a global group of friends who are just so enthusiastic about this really specific thing, and it’s told through the point of view of Tank, who I would think most people would agree is the leader of this group.”

The feature-length documentary — entitled “Humungus: A Documentary” –is Murman’s first, and something that she believes is worth the sacrifice. “This has changed my life in every facet imaginable,” she revealed. “I knew that Tank was just as dedicated to this project as me, and that gave me enough confidence to jump ship and — to say a corny cliche — to follow my dreams.”

The Humungus documentary started filming last June, making the last 10 months something of a whirlwind adventure for Faye and Tank. Although she admits that she had no idea who Tank’s Lord Humungus character was when she first met him during an interview for her previous job, working on this film has quickly turned her into a fan of the franchise. During that time, she has filmed him at Dragon Con, Wasteland Weekend, and various Comic Cons around the country where Tank makes his rounds not only as Lord Humungus, but almost a dozen other characters. And Faye even talked about joining Tank in a few of his costume groups for Dragon Con this year.

A month-long trip to the Australian outback is what really turned the tide for Murman, where she admits that she found the voice and true vision for her film. Not only that, but the people of Broken Hill and the Silverton area where Road Warrior was filmed all seemed to have their own Mad Max stories, whether it was someone’s relative on the set construction crew or a paramedic on scene during the filming. “It was like shooting fish in a barrel, finding people with Mad Max stories,” Faye said.

But it was a surprise lunch with Hugh Keays-Byrne that really made the trip that much more remarkable. “When he walked in, I looked at Tank and said, ‘Oh my God, it’s the Toecutter!'” In addition to Mr. Keays-Byrne, Faye and Tank were also able to interview Bruce Spence (the Gyrocopter Pilot), Emil Minty (the Feral Kid), Vernon Wells (Wez), Kjell Nilsson (Lord Humungus), Virginia Hey (Warrior Woman), and a few other stunt men and people who worked behind-the-scenes on the films.

“The moment that Tank approached Kjell, dressed as Lord Humungus, that was the first time that those two had ever laid eyes on each others,” Faye described. “It was a moment that I stressed about for a month, and don’t even ask me how I slept the night before. Because if I screwed this up, how could go on with myself?”

Turns out, Tank and the original Lord Humungus really hit it off in what Faye describes as “the most wonderful bromance.” Tank even picked up on mannerisms and personality traits that linked him to the Ayatollah of Rock n’ Rolla actor himself. “I’m listening to him tell stories in his very animated way,” Tank recalled, “and the fish is getting a little bit bigger and a little bit bigger, and I’m going, ‘Oh my God, that’s how I tell stories!'”

All of these brushes with fame started to establish a level of attention for themselves. “We got treated like a bit of a celebrity while we were in Silverton,” Tank said. “We made the newspaper twice, we got on the radio twice, we were on the evening news one night.”

But none of this should come as a surprise to those who have had the pleasure of interacting with Tank. He has a certain element of charisma that combines well with his work ethic and attention to detail. “There’s something about Tank,” Faye mused. “People are just drawn to him and they come to him and they ask him these really sincere questions in earnest. They look up to him. It’s so honest, the look in their eyes. Tank has something that other people can acknowledge, whether it’s subconsciously or not, and whatever Tank has in him, it inspires. And I think that people see the work that Tank puts into this passion and I think they think, ‘Yeah, I have a costume but it could be ten times better if I changed X, Y, and Z. Let me step up my game here. Look at what this guy’s doing and look how […] successful he is.’ I think that bringing this movie to a wider audience, a global audience, hopefully sparks that same kind of enthusiasm and dedication to the audience that it does to people Tank comes across in real life.”

The documentary should take another year or so in post-production, plus Faye says that she wants to grab a few more shots at Wasteland Weekend in late September of this year. After that, it will be handed over to a few editor friends who are graciously volunteering their expertise to get this film done.

But there’s one scene that Faye has already dogeared as the finale for the film’s newly discovered vision. “There Tank was in all his glory, dressed up as Humungus, just living this moment, just reveling in this moment. His back was to the camera, and I’m not gonna lie, my eyes filled up with tears because in that moment I knew I had the closing shot.”

You can listen to the complete audio interview with Tank and Faye in the player below or over at Episode 64 of the Through the Aftermath podcast, and you can learn more about the documentary at its official Facebook page.