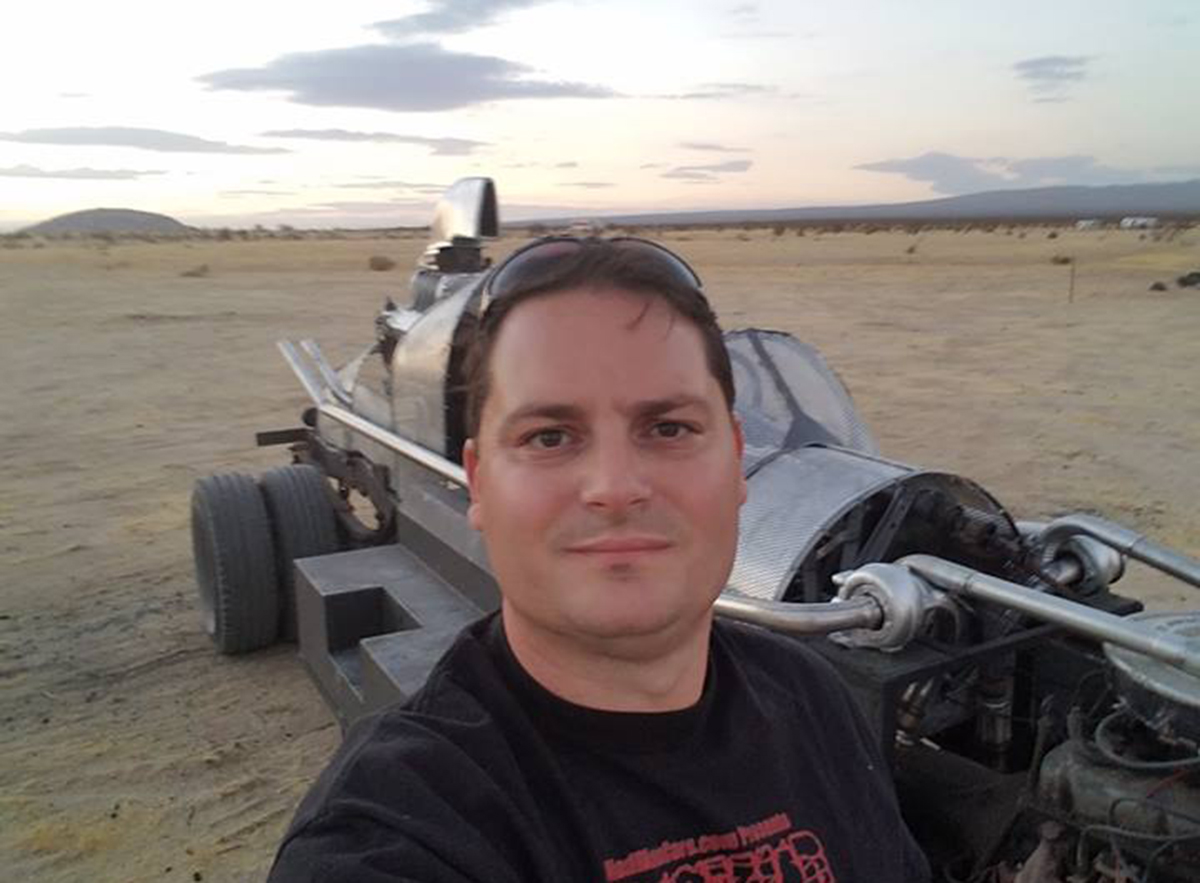 Dave “Max” Giovanni is the first to tell you that he’s not a professional car builder or even mechanic, but he has built some of the most iconic post-apocalyptic replica vehicles in the Wasteland community. “I don’t have any special skills,” he told me. “My fabrication ability is almost completely self-taught. If I can do it, anyone can!”

Dave lives near the heart of classic American Muscle — Detroit, Michigan — where he works as a firefighter and once served his country overseas as a U.S. Marine. If you’ve ever seen the Lord Humungus machine at Wasteland Weekend or Dragon Con, you’ve seen Dave’s work. In addition to the replicas he’s built from The Road Warrior, he also built the Thunder Machine from the GI Joe cartoon and comics, as well as a couple original creations.

“The first vehicle I built was a grey pickup for the Dragon Con parade in 2006,” Dave said. “We called it Marv the Impaler; Marv from Sin City because it was grey, ugly, and beat up, and Vlad the Impaler because of the giant speargun I mounted in the bed. The speargun could swivel and elevate. Marv also had twin prisoner frames on the front, a loudspeaker system, and various other post apocalyptic badassedness.”

Not long after, Dave started work on a 1992 Camaro that would eventually go through two post-apocalyptic treatments. The first iteration was known as the Hellcat, and the second was the Dreadnok Thunder Machine. “The Camaro had been in an accident beforehand, and with its numerous dents and scrapes it was perfect for a post apocalyptic vehicle,” he recalled. ” I built it for the 2007 Motor City Comic Con, and later the Dragon Con parade (again). The Hellcat had a heavily reinforced front bumper, a cool ‘hellcat’ painted on its side armor, and a flamethrower mounted where the hatchback was.” The Hellcat lived on through Dragon Con 2007, but then Dave removed all modifications and returned it to its owner.

But it was Dave’s third vehicle that garnered the most attention from fans of the genre. The Lord Humungus Machine is a six-wheeled monstrosity that was built from a 1985 Ford F150, stripped down to only the frame and engine, then rebuilt from scratch. It is based off of the vehicle driven by the Lord Humungus himself in the Road Warrior movie, and has been copied down to the smallest (working!) detail.

“The Humungus Machine has a working PA system and flamethrower exhaust,” Dave described. “Among its modifications are the two extra axles, moving the steering wheel, shifter, and pedals back and centered, and semi truck exhaust stacks. I drove the Humungus Machine in numerous car cruises around Detroit, entered (and won) several car shows, and brought it to the Dragon Con parade five times! In 2014 I had it shipped out to California for Wasteland Weekend, where it has been ever since.”

During the annual Wasteland Weekend event, the vehicle is driven by Jim “Tank” Dorsey who has perfected the Lord Humungus character over the years. While Tank’s portrayal of Lord Humungus is the product of his charisma, determination, and hard work, Dave has undoubtedly played a small role in that success thanks to his Humungus Machine.

And Dave even considers that vehicle to be his favorite build so far. “It was my first true replica, easily the most extreme, and as it was road legal(ish), I got to actually drive it alongside other classic cars. It is also the meanest looking and most distinctive vehicle I’ve made. There’s nothing like driving it along in a car cruise and hearing someone yell ‘Mad Max!'”

At this point, Dave had an opportunity to get his beloved Hellcat back, which he decided to use for the basis of the Thunder Machine replica. “The front end was replaced with the nose of a 1981 Trans Am. The cab was removed and replaced with a pipe framework that held the replica armor plates. The Thunder Machine had twin miniguns mounted on the front that really spin, working Halogen headlights, working police light bar, and a ‘jet engine’ that blew ‘flames’ out the back – actually silk blown by a fan. A friend helped me take the actual decals that came with the toy, scale them up, and apply them to the vehicle. The Thunder Machine made an appearance at Dragon Con 2014 and 2015, and GIJoeCon 2015.”

And from there, it was back to the Road Warrior replicas. “My latest vehicle was the Lone Wolf, another vehicle from The Road Warrior,” he said. The Lone Wolf from the movie was used as Papagallo’s car after it was captured from the marauders earlier in the film. The vehicle itself was actually reused in the third Mad Max Movie, Beyond Thunderdome, but wasn’t given the screen time it enjoyed in Road Warrior.

“The Lone Wolf is a silver, two-engined vehicle with a single driver’s seat,” Dave continued. ” I stripped down another old Ford truck, very similar to how I started my Humungus Machine build. The seat, shifter, steering wheel, and pedals were relocated to the center, two huge gas tanks were fabricated and welded to the sides, and an extra engine with a (nonfunctional) supercharger was mounted in the back. All the Lone Wolf’s body panels were cut and shaped from expanded metal. Custom adapters had to be fabricated to give the Lone Wolf dual rear wheels. I made the Lone Wolf specifically for Wasteland Weekend. Lord Humungus’ gang, the Dogs of War, have over a dozen distinctive vehicles. Some of these vehicles were already there, built by other fans. I wanted to add to the Dog’s fleet.”

And as you might imagine, Dave is not done building these replica vehicles from his favorite movie. His current build is the black Ford F100 from The Road Warrior, as well as the second version of the Humungus Machine. “Well, a friend of mine found a buyer for my (original) Humungus Machine. I did NOT want to part ways with my beloved vehicle, but the money was far too good to pass up.” Dave’s already planning several improvements to Humungus Machine 2.0 and promises that both it and the black F100 will be at Wasteland Weekend in September of this year.

And if that wasn’t enough, Dave also teased an additional replica build for the 2018 Wasteland Weekend, as well as the hopes of something special after that. “Maybe in 2018 I’ll make an original vehicle of my own. I have plenty of ideas for it!”

But despite his own builds, Dave says that his favorite replica car is Bill Brown’s Interceptor that has the bragging rights of being the “world’s first Fury Road Interceptor replica,” complete with modifications, dirt, and damage as shown in the latest movie. Bill’s Intercepter, as well as several other replica Interceptors, appears at Wasteland Weekend every year.

Building your own replica from the Mad Max films can be difficult these days, especially considering the fact that the movies are 30-40 years old and filmed with classic Australian muscle cars that would be rare in and of themselves. Throw in the rarity of the add-on pieces and the fabrication skill involved, and you’re looking at a serious project. Thankfully, general post-apocalyptic cars are not as difficult as they can be built using scrap metal and random car parts, but Dave offers some helpful advice on the topic.

“If you want to strip it down and put on your own body panels, get an older vehicle with a real frame. Most new cars have ‘unibody’ construction, which means the whole body of the car is part of its structural integrity. So if you were to, say, remove the roof, the car might very well fold in half. Not good. You can work off of a frame easily. Also, older cars have technology that isn’t as complex, and so they are much easier to work on, modify, and repair.

And on a lighter scale, many post-apocalyptic fans just want to make their daily drivers look a bit more “Mad Max.” Luckily, Dave has some words to say about that, too. “If you just want to make your vehicle look mean without extreme modifications, take off the hubcaps. Paint the wheels black. Wrap a chain around the bumper. Take off the doors and/or the hood. Strap some old tires to the roof. Get some temporary car paint (like kids use to show they graduated from high school) and paint your beige Volvo black.”

So there you have it! Dave Giovanni is a testament to the fact that you don’t need to be a professional to get your hands dirty on a post-apocalyptic car build of your own. Start small with some scrap metal add-ons or go all-out with a stripped-down Wasteland buggy. But if it’s something you want to do, just go for it.

I’d like to thank Dave Giovanni for talking with me about his passion, and if you know a Wasteland-style car builder who you’d like to see interviewed here, send ’em my way!