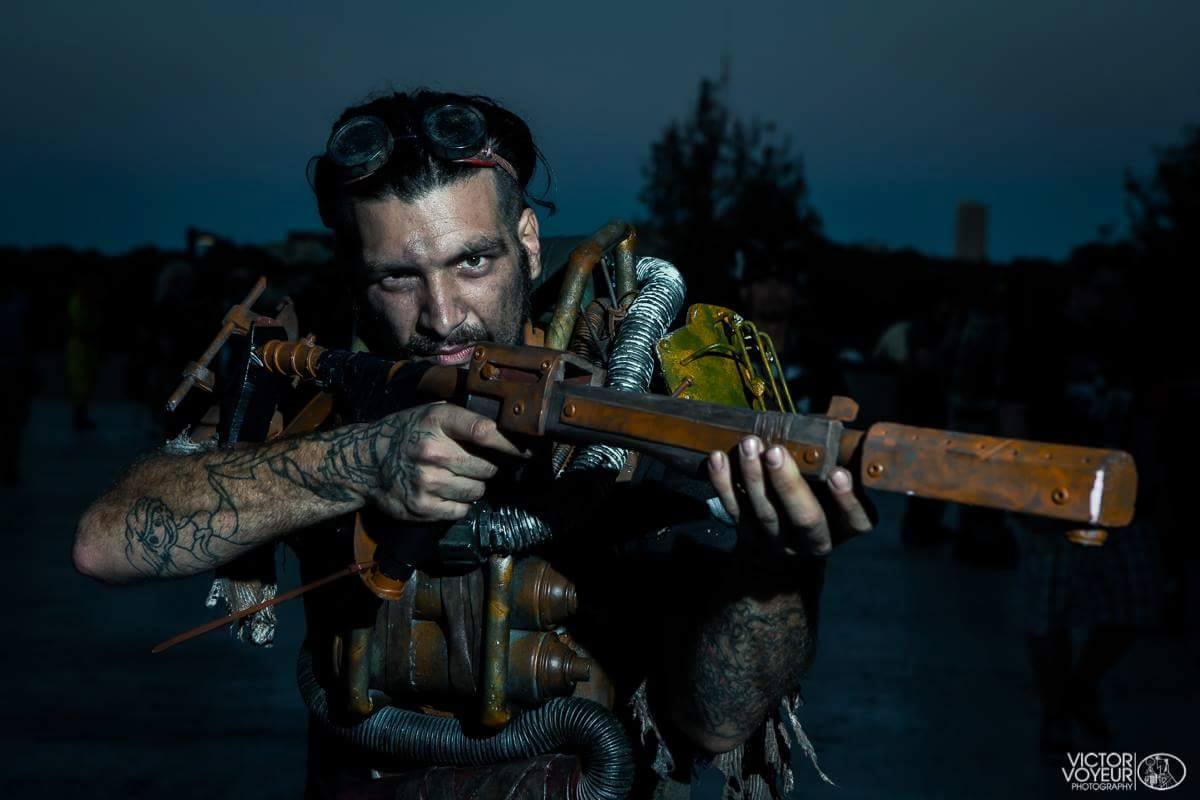 What was once left to Hollywood pioneers like John Mollo, Tom Savini, and the late Dick Smith has now taken on a new life of its own in recent years. Propmaking and cosplay is enjoying an amazing new level of respect in modern pop culture thanks mostly to resources like YouTube, social media, and our desire to work with our hands again.

The majority of propmaking and costuming seems to focus on two main topics (high fantasy and video games), but we’re more interested in those that specialize in the post-apocalyptic sub-genre. From Nuclear Snail‘s now-infamous weathering technique of dragging a leather jacket behind a car to the plethora of Fallout weapons made from resin casting, post-apocalyptic propmaking has gained a solid foothold in the industry.

So for this inaugural interview, I sat down with Larry Hastings of Vulture Productions to talk about his inspirations and what got him started in the post-apocalyptic costuming game. 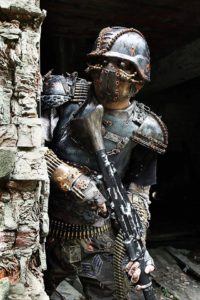 “I originally got started in prop making by constructing my own mandalorian costume,” Larry told me. “After a while I felt the need to branch out and try some other things. Not knowing where to go, I stumbled upon some post-apocalyptic costumes on Google one day and figured I’d give that a shot.”
But it was the German scene that really affected Larry the most. The Wasteland Warriors group has a style that Larry saw as more advanced than anything he’d seen before. “Their costumes are extremely detailed and everything is busy with just the right amount of rest areas in between,” he said.

It’s that German style that Larry still draws from today, with the German Wasteland Warriors even learning from his style. “That’s insanely amazing to me,” he tells me. “They’re the reason I started doing this to begin with. It’s an honor to hear that. It’s like I pulled inspiration from them and now they do it from me. Everyone helps everyone with what they make.”

But Larry’s style wasn’t always so detailed and inspiration, he confesses. “Like most people I started off using dirt. Now for my weathering I use paints, dyes, and a ton of other things — sometimes even rust powders.”

Larry describes his first piece as “a mess” compared to what he has now, although it’s something he can’t part with. “I don’t keep it around because I don’t think I couldn’t get rid of/sell it, but to remind me of the progress I’ve made in the past few years… which has definitely been evident.”

And it’s that progress that Larry is most proud of, although he admits that he doesn’t currently have a definitively favorite piece. He is, however, proud of a set of heavy armor he built from real steel, leather, and durable plastics. It’s a set that was inspired by one of the Wasteland Warriors and has become his latest signature costume. “Thus came my honor Vulture gear,” he described. “The one with the big gun I carry. God, I love that whole outfit, although most of the armor pieces can be used for other costumes.”

With that peer inspiration comes other forms, mostly from Fallout 4. “When I can’t figure anything custom to build, I play Fallout… like, a lot. So I built my heavy cage armor from Fallout 4.” Other inspirations include historical references, like those of World War I. “Currently I’m working on a trench soldier wasteland costume. I’ve always been in love with the trench warfare look and I figured it’d be awesome to mix that with wasteland costumes.”

Larry and the rest of the Vultures (a group of friends and fellow costumers who make up Vulture Productions) were recently hand-picked to help with the Southeastern Commonwealth movie being filmed in Florida. The Vultures packed up their best gear and braved the 13.5-hour trek from Ohio to the Sunshine State to help with props, costumes, and even a bit of acting.

“Everything about that trip was kick ass, except the 13.5-hour drive,” Larry joked. “But no sooner than we arrived in Florida we were put in a hotel then Frank (Bowen, creator and actor on the indie film) was going to his workshop to finish up some things. As dreary and sleep-deprived as I was, there was no way in hell I was gonna skip that. So needless to say for the first two days I was up 35 hours. Just pure excitement.”

Larry and Frank met during a photoshoot for Fallout costumers at Dragon Con this last September. The Southeastern Commonwealth webseries is set in the Fallout universe, based on the collection of states in the American Southeast known by the same name. The first episode, “Will to Power,” was released late last year with Larry and his crew being featured in the second episode. “We worked on a lot of stuff and shared stories and had some good times,” Larry recalls. “The filming was insanely fun, also! There was some damn good times down there and more will be had soon as no sooner than we finished the filming we were already talking about an episode three! So keep an eye out for that as well.”

While Larry is currently at the top of his game, he says that he wouldn’t mind going professional with it, although it’s not a hard and fast goal. “I’m not really attempting to make anything out of what I have. I have, however, met an amazing group of people. There’s Steve, Danny, Nikki, Frank, Josh, Nathaniel and so many more people than I know I’m forgetting to mention. But I love all those guys (and gals). Maybe in the next few years I’ll meet more people like them. That’s all I could ask for, however I wouldn’t be upset if I got offered a job to make costumes for movies, shows or just general costume production. That’d be pretty awesome also.”

In closing, I asked Larry what advice he’d give to those looking to get into this field. Thanks to helpful YouTube tutorials, propmaking is more accessible than ever, but Larry believes that it still comes down to hard work and plenty of practice. “It’s a learning process,” he admits. “Like most things you aren’t going to do the best just starting out; you have to commit the time and energy to it. Many a time I’ve bashed my head trying to figure out how to make this and that fit together and also look good, so you just have to stick with it. Find what makes you happy and make it post-apoc. Don’t listen to anyone who throws your ideas down, you can literally make almost anything fit into the genre so long as you apply the time and effort. Look for inspiration, talk to people who inspire you.”

And most importantly, don’t be intimidated by the big leather-and-spike-clad Wastelanders who dominate this hobby. While Larry describes himself as a “post-apocalyptic, town raidin’, whiskey drinking, cigarette smoking, irradiated wasteland badass” on his Facebook profile, he’s a genuinely good guy. “You’d be amazed how many of us are fun and friendly people who just love to talk about our work with fans. Just keep at it!”

I’d like to thank Larry Hastings for the interview and encourage you to check out his work at Vulture Productions as well as on The Southeastern Commonwealth webseries. If you have a post-apocalyptic propmaker you’d like to see featured here, shoot me an email and let me know!