Dominique de Leon is well-known for her craft, but the 21-year-old costumer and prop-maker has some secrets about making a name for herself in such a short time. 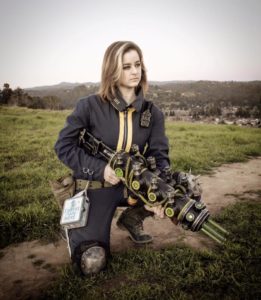 Dominique has been making costumes for almost four years, starting off in her parents’ basement, and recently expanding into a workshop in her own California home. When a friend invited her to FanimeCon in San Jose, she was hooked.

“The first costume I ever made was San from Princess Mononoke,” she recalls. “I thought it was the best costume ever, even though I was wearing blue jean shorts and Ugg boots. At the time, I felt like the coolest person ever! I was inspired by the other amazing cosplayers I saw there; some of them are actually some of my best friends today! I just wanted to learn more so I watched lots of Youtube videos and talked to other builders.”

Eventually, Dominique started building post-apocalyptic costumes based on some of her biggest pop culture influences. “If you look at my work you can tell that 90% of it is replicas from video games and 10% original designs. I am heavily influenced by Fallout and Mad Max. I have also made video game costumes from other genres besides post-apocalyptic, like my Daedric armor from Skyrim and Garrus Vakarian from the Mass Effect series.”

Interestingly enough, Dominique’s all-time favorite prop is also the same prop named as the favorite of Chris Hockett in our last costumer interview: the Multiplas Rifle from Fallout New Vegas. Dominique’s version was commissioned for a customer and it features 18 different LEDs and a super sturdy build that she was especially proud of creating. But it is hard to pick just one favorite when you’re as talented as Dominique. 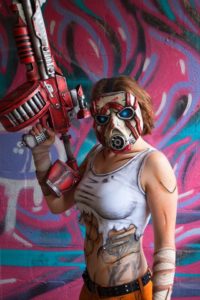 “Another one of my favorite props was my Bandit Shotgun from Borderlands. I really love that piece because it looks like it is straight out of the game. My favorite part of propmaking is when I get to paint, and there was so much of it (on this one)! In order to get the cartoony look you need to know where to put the highlights and outlines.”

Her Borderlands paint work is not only exceptional on her props, but also her costumes. A now-famous selfie she took in a hotel bathroom at Dragon Con has become viral, garnering an untold number of shares and likes across Facebook, Twitter, and especially Instagram.

When it comes to new ideas for a fresh project, Dominique says that she is usually most creative when a subject is fresh in her mind. “Like a game that I just played or a movie I recently watched. For example, my next two big projects are Doom Guy and Trico from the Last Guardian. But sometimes it’s just my favorite all-time characters!” 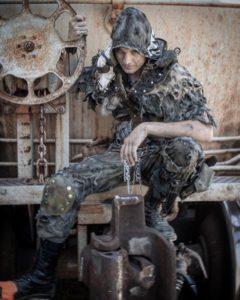 She even comments on how much her technique has grown and evolved in those four short years. “I used to be limited by my skills and experience but after almost four years of practice and trial and error that is no longer an obstacle. I can make anything I put my mind to.”

Dominique and her fiance Zach team up to make costumes that they consider to be unique, most of all. While the focus is on detail and quality of work, Dominique also has a strong focus on making costumes that most people just don’t make for whatever reason. This is especially evident with her Enclave power armor. “Most power armor cosplays are Brotherhood. I chose to go with Enclave because I LOVED the design and no one else was doing it. I like to think that they are very in game accurate.”

Dominique is a regular at several fan-based cons around the country, showcasing her wide variety of costume genres, but her best post-apocalyptic work comes out at Wasteland Weekend every year. 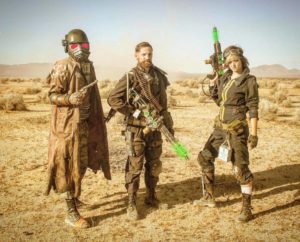 “I have SO much fun at Wasteland. It’s my home away from home. I am apprehensive about making original designs but I am so proud of the few that we have made and I can’t wait to come up with more.” 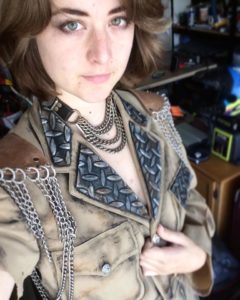 Dominique’s Wasteland Weekend line-up usually includes her Borderlands and Fallout kits, but she enjoys original creations as well. “I get artist’s block quite often when trying to come up with an original design or concept, but I am particularly proud of my Fallout-inspired Enclave military wasteland jacket. It was my only original to date that I had a clear direction from concept to completion. I’m also a sucker for anything Enclave so it makes me happy that I could include that in the outfit without it screaming Fallout.”

When asked about any advice she may have for new propmakers and costumers, she had some pointers that are important in any situation. “First of all, make sure it’s something within your skill level. There is nothing worse than working on something that is too hard and getting upset with it. Cosplay should always be fun!”

References are also a key part of Dominique’s research for any costume or prop, as well as advice from those who have already been through the same trials and errors as you will be facing. “A lot of cosplayers would love to talk about their work with you. That’s one of my favorite parts of becoming a known cosplayer. I love helping people and giving advice. People are sometimes surprised then I answer their DMs because they think I’m ‘famous’ and don’t have time to answer their questions. The truth is I’m just a person. It makes me so happy that my silly costumes I made in my parents’ garage can inspire you! I am lucky enough to now have my own home with space for a workshop room so now I have even more time to devote to this amazing hobby that I love so much and is such a huge part of my life.” 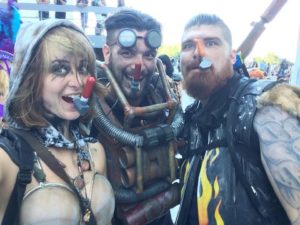 But once you have your technique down, have created a few pieces that you’re proud to show off, and are ready to show the world, where do you take it from there? Dominique has some great advice for promotion as well.

“One of the biggest things I did for myself when I decided I wanted more traction to my social media pages was ask bigger pages to please share my work. I had interesting and unique content which I know was a big part of it. Having Bethesda share my Enclave power armor and the official Borderlands page share my Psycho and Kreig were huge honors and got me TONS of traffic.

“At the end of the day, it’s not about giveaways, its not about posting everyday; it’s about posting interesting, unique content and engaging with your fans! There is nothing more special then someone recognizing you at a con and getting to talk with them.

“And no matter how big you get, stay humble.”

Cover Photo by Eurobeat Kasumi Photography. Mouse over images below for photo credits.